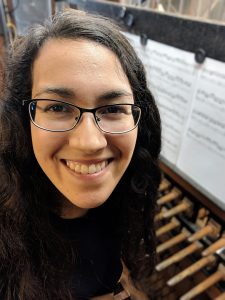 Rachel Perfecto is a conductor and musicologist originally from New York who began conducting at the age of seventeen. She has studied oboe with John Ferrillo, Joel Evans, and Hsuan Fong Chen, choir conducting with Luc Anthonis, and orchestra conducting with Ivo Venkov. Already at age fifteen, she performed Haydn’s Oboe Concerto in C Major with the United States Military Academy Band. With interests in both music and physics, she majored in music and astrophysics at Yale University, graduating magna cum laude in 2015. During her time at Yale, she was assistant conductor and principal oboist of the Yale Symphony Orchestra, with whom she was also featured as solo oboist in Bach’s Concerto in C Minor for Violin and Oboe. In 2014, Rachel founded and conducted her own orchestra to accompany the Yale Undergraduate Ballet Company in their performance of Tchaikovsky’s Sleeping Beauty. She was also assistant conductor of the Saybrook College Orchestra from 2012 to 2014.

After graduating from Yale, Rachel was awarded a fellowship from the Belgian American Educational Foundation to study the carillon at the Royal Carillon School “Jef Denyn” in Mechelen, Belgium, where she graduated with greatest distinction in June 2016. As a freelance carillonneur, she is frequently invited to give concerts and has performed throughout the US and Europe. To further her musical studies, Rachel remained in Belgium to earn a master’s in musicology from KU Leuven and a master of music in conducting from the Royal Conservatory of Antwerp. In Belgium, Rachel regularly conducts the Antwerp Student Camerata and the Cum Gaudio choir. She also was selected to participate in a masterclass with renowned conductor-pedagogue Jorma Panula in Kuopio, Finland, in 2018.